Once a major metropolis of Southeast Asia, greed and dissent has split the brothers in two a river to keep them apart.

Kemenangan and Kemuliaan are twin but separate cities, each overseeing the Barat Region and Timur Region of Ninava.

Its backstory was created entirely by community members in the ADA Ninjaz Discord Server.

Once a major metropolis of Southeast Asia called “The City of the Mirage”, greed and dissent has split the brothers in two. There is a river that keeps these two cities apart.

Originally one city, they began as one that surrounded the Kemu river. They constructed a dam with a split to bifurcate the river and feed both sides of the city. However, since its split, the dam was later destroyed and now the huge river runs between the two halves of the once singular cities. However, two smaller man made rivers still cross through the center of both cities and converge once more at the end.

Kemenangan City and Kemuliaan City are surrounded by a desert landscape.

Its architecture takes after the ancient classical styles of architecture with mostly white and marble buildings. The two cities, though on opposite sides of the river, mirrored one another in architecture and structure, reflecting both diversity and unity at the same time.

"They constructed a dam with a split to bifurcate the river and feed both sides of the city. In its prime, the city was called “The City of the Mirage”, not only because of its beauty and surreal nature amidst the desert landscape, but because the buildings of each side of the river were mirrors of each other reflecting both diversity and unity at the same time.

Unfortunately, during the rule of an evil greedy king. The king, who resided on the now Kemuliaan proper, decided he wanted his palace to be more extravagant to truly impress visitors from afar. He issued a decree to reroute the water on Kemuliaan's side to turn his palace into an oasis resort. In doing so, he gradually siphoned the water from (now Kemenangan), starving its people and causing dissent amongst a once united people.

The people of Kemenangan donned the insignia of the tortoise, for the tortoise stores its precious water preserves and can live through the harsh desert conditions for a year if it needs to. Their people were tired and weak and did not stand a chance against the Kemuliaan guard, so they reverted to forbidden dark magic and cursed the river.

The tainted river choked out the King and his subjects causing desperation in the ranks. The people of pleaded with those of Kemenangan to restore the river, so they restored the equality of the river and raised statues and structures dedicated to their evil king. The damage was done, and now bitter citizens of now two cities had to temporarily abandon their city and pilgrimage to the shamans of Daisuke to cure the curse they had bestowed upon their river. 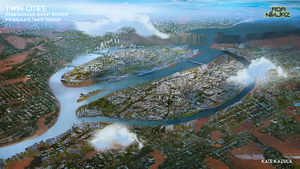