A port city of dreams with a history of nightmares

Suuri Lahti is the capital city of the Bhug Jhog region.

Placed at one of the westernmost points of the Bhug Jhog region, Suuri Lahti is known for its grand and ornate lighthouse and as the central hub of the maritime trade of Ninava.

The capital Suuri Lahti boasts a grand and ornate lighthouse that towers over all else. Marked as a feat of human civilization, it is almost comparable in size to the lighthouse of Alexandria, and yet it dates to decades prior. As the central hub of maritime trade, Suuri Lahti takes pride in the lighthouse, and has constantly devoted labour and resources to the preservation and later, modernisation of the lighthouse. It is still in use to this day.

In comparison to the rest of the Bhug Jhog region which largely consists of plains, Suuri Lahti sits on a largely flat area. What this means for Suuri Lahti is that what it lacks in elevation and terrain, it makes up with its culture and architecture.

Suuri Lahti faces the west in a half-circle, U-shaped formation. The lighthouse itself is placed on the northwest edge, whereas the southwest part comprises a complex of buildings that supports its maritime trade and is directly connected to the docks that line up neatly in the inner part of the U-shape formation.

The southwest part of Suuri Lahti is the core of their maritime industry. Whether it is for tourism and cruises, seafood or marine farming, or even the processing of such, everything takes place in this area. The complex of tall buildings and warehouses that stretch for kilometres wide are filled with buildings that serve various functions. For the rest of Suuri Lahti, this is where their citizens built homes and entertainment districts, but they are not as neatly arranged into different areas. The function of the tall buildings are often hard to discern from afar, whether they are for work or serve as accommodation. The further these buildings expand further southeast, the lower the height of the building, but the more attractions can be found. For one, it is not rare to find markets in between alleys between buildings.

Though travellers into Suuri Lahti are first greeted by tall courtyard walls with red bricked rooftops, once they gain rightful entry into the city they are immediately greeted by a grand government building, electric train and subway lines that connect directly to the main city, and cobblestone paths lined with vibrant flowered trees (in spring and summer), bright autumn trees with lanterns (in autumn), or snowy trees decorated with fairy lights (in winter). These public transport lines slowly rise in elevation to avoid the cobblestone paths, allowing for two pathways to various places: either by foot or by transport.

Decades of pride in the ornate architecture of the Lighthouse has inspired the town’s architects and engineers to style upon the central business district and residential areas accordingly. Though tall courtyard walls are found often along the roads of Suuri Lahti, they are not without ornate designs drawn on them. The trains and trams themselves are always decorated, often with colors and patterns that really bring home its status as the center of the Ninavan maritime trade. But despite the tall buildings and seemingly isolated spaces, Suuri Lahti itself is lined with greenery like shrubs or small trees along the roads. 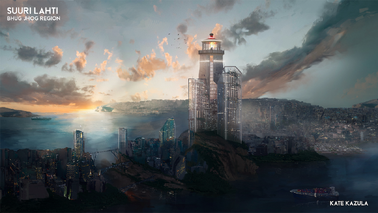