An urban tropical paradise, also home to the underbelly of the Atsuko Clan.

Raya is the capital of the Wharekai Region.

Located by the coast of the Wharekai region of Ninava, Raya is a tropical paradise that is also home to the Atsuko Clan.

Raya lies near one of the southwest tips of the Wharekai region in southern Ninava. Though it is a tropical paradise decorated with a towering concrete jungle sitting in the midst of a tropical jungle, it boasts diverse, vibrant flora and a beautiful beach area. It was once a pirate haven, remnants of what once was visible from docks dating as far back as a thousand years ago and shipyards not far from the mainland. On the island closest to the shore, a massive yet derelict ship perches upon a saltmarsh island. It is preserved and maintained as a historical legacy by the people of Raya.

There is a myriad of islands off the coast of Raya, many of which are still shrouded by palm trees and discernible by the large rocks that sit atop their slight valleys. These islands are often veiled in mysteries of folktales that are often supernatural in nature, and are often untouched by the citizens of Raya. These tales are said to have been passed down since the time that Raya was once still a pirate haven. The saltmarsh island was said to have originated from the time of a great tsunami that submerged almost the entirety of what used to be Southern Wharekai, and had left behind a ship that had sank due to the disaster.

Being a tropical paradise, Raya boasts a shopping alley on the beachside area, along with many other entertainment and dining venues. There are cobblestone paths that lead to the main street or the beach area, meticulously lined with tall palm trees and vibrant shrubs. On the shoreline, the docks that were once made of wood have now been reinforced by steel, but still retains wooden planks and have now been given rope fencing. There are various boats bobbing back and forth, some of them being tour boats that allow tourists to Raya to traverse and explore the many islands of Raya.

On the eastern side of the city, there are vacation homes lined up along the beachside area, often expensive-looking ones that have been meticulously and particularly decorated. Some of them are further back from the beachside area, but are perched on foundations that allow people to stay in some sort of treehouses along the jungle canopy. There are suspension bridges that connect these houses to one another . From the beachside and jungle vacation house areas, there is a direct transport line to the city.

Around its skyscrapers in the center and along the roads of the residential area, there are tall poles that function as the substructure that supports the monorail transportation system of Raya. In addition to these monorail lines, there are floating roads that support private transportation owned by Raya residents. These lines extend as far out to the entrance to the untouched jungle and to the beachside area.

Behind the beachside area, Raya is decorated with skyscrapers and towers and the majority of these are luxury apartments designed specifically for the rich. These skyscrapers and towers sit on foundations fortified naturally by the elevated hills of the natural jungle that Raya is built upon. Most of these buildings are decorated with vertical forests that complement the dark green of Raya. Around these skyscrapers and expanding outwards in a somewhat half-circle shape, somewhat reminiscent of a fan, are the residential areas. These houses and apartments neatly follow the brick roads that follows the natural shape of the jungle’s geography. At the easternmost area, the residential area is slightly scarce as it lies close to some small hills and mountains. The reason that people avoid this area is because these hills and mountains are home to a set of caverns that are avoided by the locals for reasons often cited as to not disturb the spirits that lie within. These mountains extend to the beachside area and there is a slight elevation  that separates the main entertainment district and the vacation house areas.

Around the area of these residential areas, a little bit further beyond the suburbs is an area that expands into the jungles. This area consists of houses made of salvaged parts and are often the dumping grounds from the bustling main city (the favelas). It is uncared for and the true element of Raya often beguiled by the grand buildings and the tropical paradise that Raya has been made to be. These houses line a narrow pathway and are built very closely to one another, often built upon one another as if some sort of makeshift apartment (resembling the villa miseria). These shantytowns are often loomed over by some form of taller building or foundation, or other attempts to hide away their presence.

Though it is a tropical paradise that seems devoid of the world's worries and vices, Raya is coincidentally the center of an underground Atsuko headquarters that extends throughout the city. One of the possible entrances is a set of underwater caverns that lies to the west of the shoreline, under the western docks where Atsuko-owned ships dock. There is another entrance through the Aniruddha caverns on the easternmost residential area, where the mountains are. These are the exact caverns that people are urged to stay out of. The underground HQ connects directly to the tallest tower in Raya.

Though there are still other ways to access the underground headquarters, these caves comprise of a whole underground network that are welcoming only to those with access. 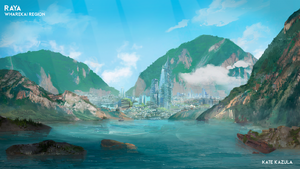