Surrounded by acres of farmlands and an open-pit mine to the west, Potiri City is formed in the shape of an almost perfect architectural circle, with the inner parts of the city resembling square-like geometric shapes.

Potiri City is surrounded by acres of farmlands that extend to the horizon. To the west, towards the massive lake that sits between Pehili Yarvih and Belakang Naga, a small river divides Potiri and the open-pit mine, called the Salutara Mines, that sits between Potiri and the lake. The city as a whole is formed in the shape of an almost perfect architectural circle save for several parts that jut out into the farmland areas, though the inner parts resemble square-like shapes from a bird’s eye view. While the outer parts consist mostly of farmland areas and small houses that belong to the farmers, the main city area itself is more of an industrial, flat city area.

In circles surrounding the city beginning from the front of the arch area are canals that surround inner Potiri, forming small water rings around the city. There are a total of five of the water rings within Potiri, with several bridges allowing for access into the other “layers” of Potiri, though there are only a handful of bridges for cars and other forms of transportation with specific lines for other public transport vehicles such as trains and trams. To tell apart the roads and the canals, the roads of Potiri are painted black.

The closer one goes to the outer sides of Potiri, the more visible the farmland area becomes. This is usually evident through the vegetation present around the streets and the buildings, as the streets of Potiri gradually transition from a concrete jungle into far greener streets with the growing number of vegetation. In addition, the buildings also shift slightly in terms of the architectural style - there are more glass buildings and other forms of buildings for vertical farming present. Though there are various kinds of greeneries, palm trees are most dominant in the city of Potiri.

The outer side of Potiri consists of a large farm area, consisting of huge windmill farms around the food farms. In these surrounding areas, there are smaller clusters of homes for the farmers of Potiri. To the west of Potiri, a small river divides the city farm area and the Salutara Mines.

At night, the city of Potiri lights up in neon green, red, blue, and purple colours. The tall buildings in the middle of Potiri are lit up with holograms and beams of light shot up at the sky. On the buildings close to the outer area of the city where the light and colors are not as prevalent, it is possible to see the edges of the streets light up with yellow lines at night. The color yellow follows from the outskirts of the city all the way to the farmlands, where yellow lines trail along the green fields.

The buildings within the city are reliant on the industrial architectural-style, evident by the dominant use of raw rough materials and dominant block colours (white, brown, some navy) for the buildings. Most of these buildings are only several stories tall, with flat rooftops. There are very few high-rise buildings in the city of Potiri, save for the central business district area in the middle of the city. Most of these buildings are concentrated in the middle of Potiri, but not only do they stand out from afar, but they are also eye-catching because of the neon lights and signs as well as the holographic billboards. Between the buildings, there are occasional empty spaces (parks, wide-buildings, open space areas), though these are not as often seen from the bird’s eye view of Potiri.

In the middle of the central business district, exactly in the center of the city of Potiri, is a large grey fountain surrounded by a roundabout. To the west of the fountain is a tall, needle-shaped TV tower, with the observation deck area coloured a rather dim, unpolished golden colour. To the south of both the fountain and the TV Tower is an arch, coloured in dull golden ornaments and greyed white.

The Salutara Mines is an open-pit mining area that descends downwards, with previous excavation efforts having shaped the pit almost similarly to that of a staircase that is reminiscent to the theatres used by the ancient Greeks. 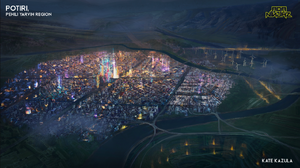