The center of maritime trade in Ninava and home to many Atsuko Clan endeavors.

Leng Hai is the capital of the Jing Mao Region.

Once a whaling village and now the center of Ninava's maritime power, Leng Hai is an imposing city backed by an enormous area of elevated flatlands in the middle of Jing Mao.

Leng Hai was once built upon the sea with docks as pathways and large ships that functioned as buildings of sorts. Now, in the modern age, these docks have been modernised and now jut out towards the sea.

A third of Leng Hai City is on top of concrete docks that are placed on top of the waves. They function as an extra landmass, though they were originally wooden docks utilized by seafarers to make travelling to and from the city easier and more accessible, and especially for people in the fields of fishery and aquaculture. It is still in use now.

As the center of the fishing industry in Ninava, it comes with a wealth of buildings and complexes devoted to maritime and marine enhancement. While the western side of the docks that is closer to the mainland has been transformed into large buildings that tower over the city, the rest of the docks area is devoted specifically for fishery and aquaculture. There are large marine logistics centers connected to the maritime complex on the western side on the mainlands by the dock and areas for fishing boats. There are also areas for mariculture and fish farming in this area. The larger maritime complex on the mainland comprises of a complex of tall buildings that make up the industrial precinct of Leng Hai, with centres for training, research, and even education as one of the largest marine research campuses (if not the largest) lies in Leng Hai. In addition, there are also areas for fish processing and products, as well as a market for fresh fish.

To the eastern side is the entertainment district, which expands outwards to the residential areas, though these residential areas are largely apartments as compared to individual housings. There are a few palm trees that line the beachside area, but natural greenery like these are rather scarce in Leng Hai. Trees or shrubs would often decorate the side of the road in an orderly fashion. Or, they would be found in apartments, with some having a vertical forest on each floor.

In the centre of Leng Hai where the concrete docks and land meet, there is an old but large steel ship on the west side. It faces to the east, carrying the Jing Mao region flag. It was once paraded as a display of power in regards to the region’s capabilities as a maritime powerhouse. Now, the ship has been preserved and maintained as a part of Leng Hai’s historical legacy. It is also used by the people of Leng Hai as the main building for capital administration centres. The administration centre itself mainly operates out of a tall building that has a skywalk attached to the ship, but the public image of the administration centre is the ship itself.

The beachside area of Leng Hai harbors a few wooden houses from the times when Leng Hai was still a whaling village. Though it was originally kept for historical records and educational purposes, people often favour visits to the more modern entertainment districts or the industrial complex area over these houses. As such, this area is often used for recreational fishing by small groups or tourists. 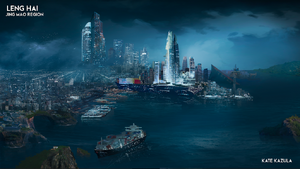