Lady Josefine is the protagonist of the "current" portion of Aramar Origins: Volume 1. As the daughter of the Honorable Right, Elram Aramar, she was born with a level of renown, however, it was her fierce capability in battle that gained her the recognition she is known for amongst the rest of the Aramar Clan.

Born mute, she utilizes a unique mask constructed of Aramar technology that allows her to speak. Alongside this mask, Lady Josefine has also formed a bond with a Spirit Guardian.

Following the attack on Aramar Towers, Lady Josefine relentlessly fought through hacked AI drones in her search for her missing father. During this search, she also came into contact with Ashly Novak, an Aramar recruit, who gave her further information on her father's whereabouts. At the end of Aramar Origins: Volume 1, Lady Josefine discovers a ninja stealing information from inside the building, and is quickly defeated by the unwelcome visitor who escapes with the stolen data. Soon after, Ashly Novak returns to share the discovery of a recovered weapon that appears to have been created by both the Atsuko as well as the Daisuke. Lady Josephine sends Ashly to report this to an Aramar commander, and then continues her pursuit of her father. 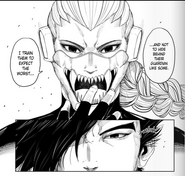