Isola Delest is the capital of the Kudu region.

Tucked in a lone island off the coast of Kudu region, it was originally a fortress mainly used for armory, a shipyard, and other fortification purposes. During the invasion of the Japanese and the Spanish, it was used as a base by the rebels of the Kudu region.

Previously, the only access to Isola Delest was through a ship and methods known only to the Kudu people. Immediately after leaving the coast of mainland Ninava, there are crags and reefs visibly jutting out of the water, some formations resembling a large set of teeth that has inspired a multitude of horror stories about the island past the fog. However, in modern times, a cable-stayed bridge has been built to connect the main and lone island. Stretching over 50-kilometres long, it was built in the early 2000s to introduce ease and accessibility for people intending to enter Isola Delest. While there are ferries that allow access into and from Isola Delest, safety has always been a concern because of the rough and rugged rock formations around the coastlines. The color brownish-red was chosen to match the watchtowers and ruins.

Because of the shape and structure of its geography, the fortress previously used by the rebels against the invasion follows the structure of the terrain, ruins of brick and clay easily found alongside the elevated hills and its surrounding area. Originally meant to surround the entire city, plans were abandoned as the invaders were driven away from Ninava. Hence, the reason behind why the ruins are found mostly on the western side of Isola Delest, but the eastern area remains untouched. The most obvious remnant of Isola Delest’s historical defence against the invaders are the preserved watchtowers, placed strategically alongside the hills, with a few placed around the coastal area. The colour for these ruins are brownish-red to match the terrain, providing camouflage for unsuspecting, possible outsiders who may have braved the treacherous waters and survived.

To the south-western area and down onto the coastal area are small docks for ferries, though other boats are visible as well, such special tour boats equipped to go around the island. There is a watchtower here that has been repurposed into a lighthouse, as well as cable cars that lead directly into the administration area.

The bridge connects directly to an elevated area on the western side, bypassing the coastal area to avoid harming the natural formation in the coastal area. This area leads directly into the city administration area with tall buildings and gated complexes. The predominant color is white-light greyish, as Isola Delest is a desert island. There is also a large library with an uneven roof with see through walls. To the north of the city administration area is a small fortress area which is preserved similarly to the ruins and the watchtowers, but strictly off-limits to the public. As such, there is no public entrance that can be seen.

Past the city administration area is the Central Business District area, closely encircling the administration area along with some apartment complexes and recreational areas. There are desert flora visible along the streets of Isola Delest. Before the suburban area, there is a large grade separation area that can lead back to the CBD area or into the suburban area, which consists of tightly packed houses and small entertainment venues extending to the south. To the north of the suburban area are countless natural freshwater springs, which has been pivotal to the development of Isola Delest. It is located on and near elevated mounds or hills. It connects to an artificial water reserve constructed during modern times (similar to the Azraq Wetland Reserve near Azraq, eastern Jordan). 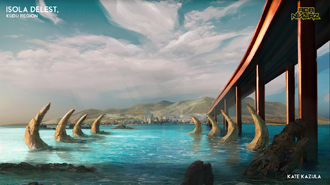