Denton Paewai is the protagonist of Clan Wars: Stories (Daisuke).

He first appeared as a new Daisuke initiate alongside his best friend and fellow initiate, Teran. Denton is loyal to those he cares about. His family and his friends are his priority, making it all the more painful for him to leave his family and walk the path of the Daisuke.

After the death of his best friend Teran, during a mysterious attack at the Daisuke Temple, Denton is informed by his superior officer, Javal-Senis that his sister, Amara, has gone missing. Grieving his best friend and with a new revelation of his missing sister, Teran is approached by Manaia Hahona at the Fallen Tree that the path that lies ahead of him is greater than he could have imagined.

Faced with the challenges of grief and near death experiences himself, Denton’s visit to his family home refuels his strength and reminds him of why he took the path he did. His mother’s shrine to the Deity of the Daisuke, Izanami (Iza), helps Denton remember that wherever he goes, there’s always someone just out of sight looking down on him, helping him decide what path he is to follow next.

Chapter V of Clan Wars: Stories presents Denton with the opportunity to climb the ranks of the Daisuke, but he must choose a path of vengeance and closure for his friend Teran or to move forward and discover information pertaining to his sister’s whereabouts. 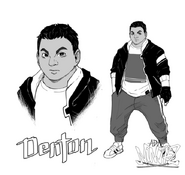 As with the other protagonists in Clan Wars: Stories, Denton’s decisions in the story are driven by NFT holders via public vote in our Community Discord Server.