A jewel in the desert living off the power of its mighty Storemur Falls.

It is a large sprawling metropolis lying at the edge of deserts to its north and forests and jungles to its south. This city utilises the power of the mighty Storemur Falls.

Den Storemur is a bustling city named after the massive steep escarpment that sprawls from east to west as far as its citizens can see. The cliff itself, standing at over 1000 metres tall, had experienced constant erosion over the millennia, causing the spot where the river falls to slowly become concave, carved into the wall of the cliff like an almost planned semicircle.

Above the cliff area, there is little to no vegetation as the top of the cliff is the end of the rolling sand dunes that sprawls up north through three whole regions of the country of Ninava. Any vegetation that does exist lies tightly bordering the huge river that runs through the desert from a single mountain range almost beyond the horizon. The river is still visible above the sands only because it runs through a shallow rocky ravine that borders both sides of the river up until the edge of the cliff.

At the edge of the semicircle area and spanning the full height of Storemur Falls, an assortment of ancient and modern water mills harness the violent power of almost 1500 cubic meters of water per second falling from these massive heights through the concave carved area of the cliff.

A mighty waterfall utilised by the residents of Den Storemur using water mills to harness power that runs through the city.

Along the cliffside to either side of the waterfall, the Old City stands guard. It is an ancient city carved into the walls of the cliff, and now it is peppered with new constructions that jut out of the cliff overlooking the valley below. The massive ancient vertical metropolis was once the seat of power of the Ninavian empires prior to any Japanese rule over the nation. The old city is a mix of massive carved statues, resembling a mix of Egyptian Sphinxes and Buddhas, as well as the facades of different dwelling caves that housed masses of people in their interiors.

Now, these caves have long been taken over business enterprises and energy conglomerates as bases of operation on the western side while the eastern side of the cliff is now mostly wealthy upper class mansions and estates overlooking the New City. The New City lies below the cliffs, beginning at the huge lake just below the waterfall.

To the eastern side, are lower high-rise buildings, residential neighborhoods and commercial districts that follow the edge of the river. It follows all the way to the mouth of the river that flows down south before turning hard east towards the ocean at the edge of the mountains. The buildings and neighborhoods are like the first green oasis in contrast with the sands to the north above and beyond the cliffs.

To the western side of the lake and river lies the couple of skyscrapers that house most business of the regions south of Asahi. Further to the west, due to the mostly east-to-west direction of winds in the region, are the industrial zones, mostly powered by the hydroelectric energy of the waterfall, but still spewing enough industrial fumes to be a region where only the lower class and homeless can manage to survive.

An ancient city tucked within the walls of the cliff. It was previously a seat of power for the ancient Ninavian Kingdoms. Now, it has been taken over by business corporations on the western side and by wealthy mansions on the east side. The east side leads to a view directly overlooking the New City.

The New City lies under the cliffs, just directly below the Old City. It sits right next to a huge lake by Storemur Falls.

On different sections of the cliffsides, whole neighborhoods are carved, all interconnected by steps that resemble a massive, ornate stepwell, carved completely vertically on the walls.

The architecture is mostly modern East Asian with Arabic influences. More modern looks of the city can be compared to Dubai. 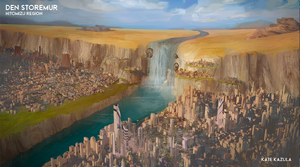