Fortaleza is the capital of the Belakang Naga Region.

Founded by the Japanese during their imperial rule, the city of Fortaleza was later aptly named by the Portuguese after its main defining feature: the fortress stronghold at the peak of the shortest mountain in the range.

Fortaleza is in the center-northern area of the Belakang Naga region. The mountain atop of which the central fortress was built is one of the last in a long line of mountains that sprawls south from the city in a single curved line. It’s a stronghold city that was first established during the Japanese rule as a mining hub for the empire under the original name of Sebone.

Fortaleza is a city with an abundance of natural minerals and ores, and as such a lot of buildings were built around the mountain so as to not disturb the mines. It follows then that the structure of the city is largely vertical, with the city itself sprawling done one side of the mountain all the way to the valley. The main path descending down from the fort compound is comprised of both flat stone surface and stairways, with fencing following the main path itself all the way down to the mining area. Roads for driving and public transport are separate, and they hover in mid-air,  There are also several public elevators for use, as the city itself does not comprise of only one level of structures, but multiple. Some buildings are even placed cliff-side, under the fort. Many of these elevators were originally built for mining purposes, to transport ores and the like, but some have now been repurposed for public use.

There is no obvious distribution of the city structure in Fortaleza, but the buildings closest to the fort, which is now the center seat of the government are perhaps the closest to what one may describe as the central business district. Shops, schools, and other needs are placed closer to the top. The further down following the main road is where residential areas begin. There are more apartments than houses in Fortaleza considering the geographical distribution of the landscape, but when there are they are often further down past the apartments. The more lavish mansions or housing areas are tucked away on the level right under the fort.

Closer to the bottom of the valley is the centre of the mining business in Fortaleza. There are train tracks and large roads that lead outside of Fortaleza for transport trucks, both built to distribute the needed natural resources to either the rest of Ninava or to be imported outside.

Historically, it was taken over by the Portuguese during the Spanish imperial rule as a strategic point of resources in the region. As such, the architectural style of the fort and the city surrounding it is a mixture of both Eastern and Western civilization.

The fort was first created by the Japanese empire, but had received Portuguese and Ninavan influences throughout the years as it underwent restoration and renovation. The fort, now called “the Burden of Bahamut” stands at over hundreds of metres tall and overlooks a compound surrounded by tall wooden fences and curvy elongated roofs. It was first made with carved wood and painted golden leaves, but has now been reinforced and reconstructed, with the bottom part of it being made of white brick and stone. The top parts of the building are decorated with slanted, curved rooftops. The back of the castle directly faces the mountain.

During Japanese rule, the construction of this fort then extended into an entire military compound with other buildings styled after the fort. There are carefully planned pathways that lead to and form the main structures with small pavilions and tea huts. However, when the Portuguese took over, the small pavilions and tea huts have been replaced by small blocks for weaponry and defence purposes. In the present day, they have been repurposed as regular buildings, but some of the old cannons still jut out from the top of these buildings, preserved by generations of Fortaleza’s leaders. In addition, some of these buildings are interconnected to one another with slender, fenced bridges made with white bricks, courtesy of the Portuguese in the 1700s. However, the fort is largely separate and not interconnected to other buildings for strategy purposes.

The fort, called Burden of Bahamut, was named as such due to the Islamic influence from the merchants that had spread all over Southeast Asia, beginning from the 9th century. 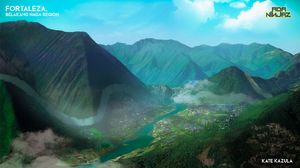 • The roofs on the Burden of Bahamut are the Japanese irimoya-style roofings. The top parts of the roofs are shaped similarly to Nagoya Castle in Japan.