Ashly Novak is the protagonist of the Aramar Clan Wars: Stories.

Clan Wars: Aramar Stories, Aramar: Origins Volume I
Introduced as the protagonist in Clan Wars: Stories (Aramar), Ashly is an initiate into the Aramar Clan. Adventurous and explorative, she has always dreamed of being an Aramar. Her extroverted, engaging personality makes her a natural leader, constantly reassuring those around her that their voices are heard.

Ashly’s first appearance in Clan Wars: Stories amplified her energetic, outgoing personality, ‘fan-girling’ over her experience of finally setting foot in Aramar Towers and seeing illustrious characters such as the fabled Honorable Right, Elram Aramar, in the flesh. Not soon after this, however, Ashly is thrown into the deep end, stepping into her role as a leader with her peers in danger during the attack on Aramar Towers. In the aftermath of the attack, she shows off her ability to handle great pressure followed by her autonomy and tenacity when stepping from the role of leader into that of a detective to try and assist Miss Josefine solve the case of the missing Honorable Right.

Ashly’s difficult upbringing led her down a path of independence; though her interactions with Miss Josephine may display a desire for mentorship and personal growth, as well as the approval of a more experienced Aramar figure.

Ashly has a deep bond with her younger brother, who she thinks about when faced with potential death, held at gunpoint by the security drones of Aramar Towers. She has the best interest of those around her in mind when making tough decisions, whether it be evacuating her fellow initiates during the attack on Aramar Towers or fighting through the pain of her wounds to make sure she reaches Miss Josefine to deliver important information regarding the missing Honorable Right.

In Chapter V of Clan Wars: Stories, Ashly is invited by Commander Vin-Chen to join an elite team within the Aramar clan in response to her impressive heroic acts displayed throughout her chapters.

Being inducted into the Aramar Clan is a dream come true for Ashly. Though she’ll have to learn to work as part of a team, her tenacity will open doors and her ferocity will guide her through them. 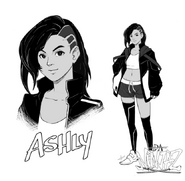 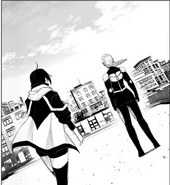 As with the other protagonists in Clan Wars: Stories, Ashly’s decisions in the story are driven by NFT holders via public vote in our Community Discord Server.