Aoife Coileáin is the protagonist of the Atsuko Clan Wars: Stories.

First introduced as the protagonist of the Clan Wars: Stories (Atsuko), Aoife, an Atsuko initiate, is a fighter with a delicate heart. She presents a hard exterior to her acquaintances and her enemies but lowers her guard to those she cares about. Aoife is quick and agile, but her physical ability lies in her strength. Despite her broad stature, she is adaptable to her surroundings as seen in her evasion of the police when investigating the crime scene at the Atsuko depot in “Clan Wars: Stories, Atsuko - Chapter I”.

Missing 3⁄4 of her left little finger, Aoife carries both mental and physical scars with her on her adventures. They enhance her moral compass and remind her to calculate her decisions. Once a decision has been made, she will stop at nothing to reach her goals. She can see people as a distraction and generally chooses solitude when presented with assistance.

Aoife takes on the role of an independent detective early in the Clan Wars: Stories, when investigating a crime scene at the Atsuko Depot, using her problem solving skills to evade the Asahi PD and make her way inside, where the scene is even worse than she could have imagined. This is where she first encounters Karina, a fellow Atsuko initiate who offers help to Aoife and is met with rejection as Aoife continues her path alone.

Aoife goes on to face the consequences of this decision as she returns to Atsuko HQ and finds Karina in a hospital bed. Aoife facing the outcome of a decision she made (which the ADA Ninjaz community voted for) helps her understand what it truly means to be a part of a Clan. This insight is swiftly challenged when The Underlord Mot informs the two of them that they must duel to see in which of the two real strength truly lies. The Underlord Mot calls the duel in Aoife’s favor and she is offered the opportunity to go into a partnership with Karina. 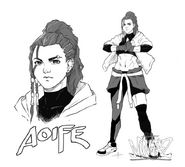 As with the other protagonists in Clan Wars: Stories, Aoife’s decisions in the story are driven by NFT holders via public vote in our Community Discord Server.