You must decide your place in this war. You must decide where to weigh your influence in order to affect the threads of destiny that have fallen upon these lands.

Your clan, your nation, and your destiny is calling for you. It is time for you to become the Ninja that Ninava needs.

Browser
ADA Ninjaz: Shards of Ninava is a 3D play and earn, build and earn isometric multiplayer action game where players, representing one of three clans, fight to claim territories by competing in arena mini-games. Developed on the Cardano blockchain network, the game is played in four interactive layers:

A player does not need any ADA or $NINJAZ to begin playing. Simply head on over to the game and connect a Nami or Eternl wallet. Holders of any Ninjaz will receive a special skin in-game.

At the mini-games layer, players can battle in arenas (against AI and/or other players) to earn $NINJAZ token rewards.

At the clan territory wars layer, clans fight for their claim over provinces. Players who successfully complete mini-games win Unity Points for their clan. The clan at the end of each session with the most provinces claimed will win an equal share of the session's reward pool.

In the built arenas layer, players can build mini-games of their own for others to play and complete. This layer is built for those who love to tinker and build and as such has a steeper learning curve. The more players that interact with their mini-game the more $NINJAZ tokens the player earns.

In the social spaces layer, we remove some of the design constraints and rules around built arenas to allow players to create spaces for other players to interact in a more relaxed and social environment.

Welcome to Ninava. It is the year 2034 AD and war has broken out once again. An ancient struggle has woven its way throughout our nation, its threads held by the three clans of Ninava: Aramar, Daisuke, and Atsuko.

The Territories of Ninava are numerous and eclectic, each with its own unique culture and commodities. In Ninjaz: Shards of Ninava, your clan must compete against the others in order to take control of these territories and gain the rare Hoskinanium- imbued relics: Hoskis.

Your mission will take you on a vast journey across Ninava to some of the wildest cities and landmarks in the country. The sheer cliffs of the Lakontey Mountains, the tropical paradise of Raya City, and the mighty falls of the sprawling metropolis, Den Storemur; embrace the natures of these varied lands and reap from them the Hoskis relics that are contained within.

The clans seek power, influence, and the rare supernatural element, Hoskinanium. This strange metal alone produces the unique abilities of each clan: 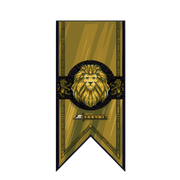 For the Aramar, the self-appointed protectors of Ninava, order, stability, and protection are their main focus. They aim to achieve this through their deep understanding of the intricacies of technology. It allows them to construct and control a vast array of Artificial Intelligence, advanced machinery, and superior weaponry. 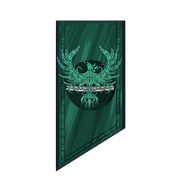 For the Daisuke, splintered into nomadic groups of varying technological savvy, they are given the ability to commune with nature to a supernatural degree. As the helpers and saviors of the land, their goals revolve around nature and its nurture and ensuring the preservation and celebration of life. The deep bond created provides them with influence over their natural surroundings, sway over the beasts of the forest and the field. 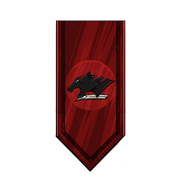 For the Atsuko, who are branded as outlaws, there are rumors that speak of their dabbling into the black magic, necromancy, and even communication with the dead. The double-edged gift of a veiled invitation to commune with the world beyond the grave grants them access to magic, secrets of those long past, and an intimate kinship with the shadows. They are as secretive as they are dangerous.

The stakes are high for all of Ninava. Which clan will come out victorious? How far will they go to defeat their enemies? What sacrifices will be made in this battle for dominance? And what will your legacy be in the war of the clans?

The fate of Ninava rests in the hands of the clans. Will the Aramar gain control and finally rule this land with the fairness and judgment they desire?

Will the Daisuke inherit the authority of Ninava and utilize their influence to restore this land to the natural state in which it was created?

Will the Atsuko overpower all others and repair the veiled divide that exists between the living and the dead?

You must decide your place in this war. You must decide where to weigh your influence in order to affect the threads of destiny that have fallen upon these lands.

Your clan, your nation, and your destiny is calling for you. It is time for you to become the Ninja that Ninava needs.

For a full breakdown of each phase of the roadmap head to Development Roadmap. Alternatively, to learn about the $NINJAZ token click here. 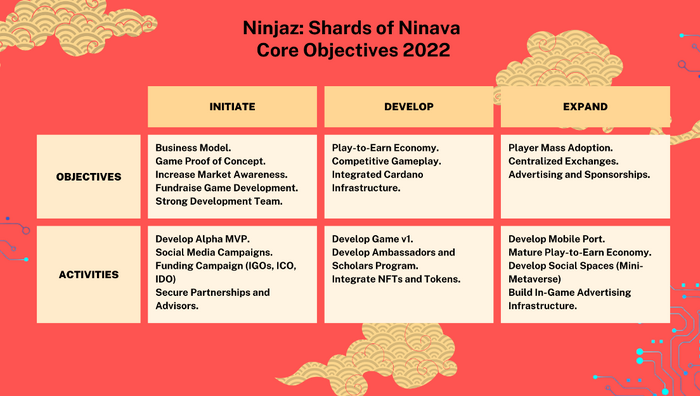 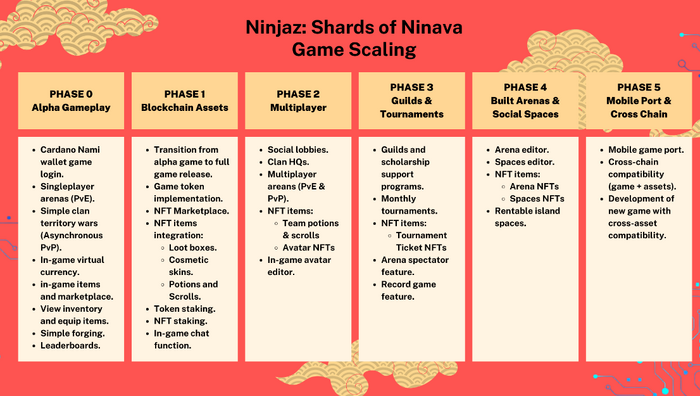